We are experts in our fields and so we created this place in a true ski touring paradise to share our knowledge and passion with you – our guests.

We are people for whom outdoors is the way of life. We are mountain climbers, skiers, divers and anglers. We ventured with expeditions to Patagonia, Mali, Madagascar, Causacus and Tien-Szan, we climbed in the Alps, Himalayas and we even stormed K2 in winter. We are experts in our fields and so we created this place in a true ski touring paradise to share our knowledge and passion with you – our guests.

Owner of the lodge, a keen mountaineer and a mountain runner. 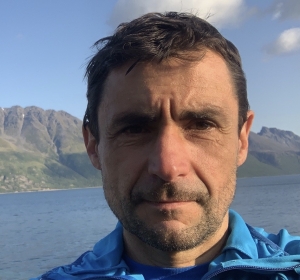 Artur opened about 40 new routes in his home Tatra Mountains, climbed extensively both in the summer and in winter (mostly accompanied by his wife Alicja), attempted a new route on Cerro Torre in Patagonia and Kedar Dome in Garhwal Himalaya, and ventured to Tien-Szan Mountains. He is also a holder of a team speed record of the entire Tatra Ridge which he completed in 2017 together with Adam Pieprzycki. He was a president of a renowned Warsaw High Mountain Club for a decade and was involved in many social activites for the climbing community. In recent years he became involved in mountain running and completed several interesting races, such as Tromsø Skyrace for example.

A chief guide at Lyngen Outdoor Center. An IFMGA certified guide since 2012 and an active mountaineerer since 1998. Pawel visited many mountain regions of the world and became especially attached to the wild mountains of Causacus of which he is a true expert. Some of his climbs there became highly acclaimed worldwide. He has lived in Norway for many years and guides skiing, mountaineering and ice-climbing tours with great professional skills. Pawel is a natural-born guide, with great interpersonal skills, he has calm, cheerful and relaxed personality topped up with great attention to detail. Speaks English, Russian and some Norwegian.

He has been an IFMGA mountain guide for 25 years. He is a dedicated skier and has guided clients in Norway for many years. He is also a passionate climber and has coached the Spanish National Climbing team. He has travelled to the mountains all over the world and opened some very famous climbing routes, also in Norway. He is an excellent professional and a person with a great sense of humour highly appreciated by his clients. Speaks Spanish and English.

An IFMGA guide since 2009 Marcin has been a dedicated mountain man for more than 20 years. He has made his name making some very hard winter ascents and hard climbs in the Alps and mountains all over the world. A very keen skier he has been guiding ski-touring in Norway for many years, with special focus on Lyngen and Uloya area. Marcin is a very cheerful person with excellent communication skills. Speaks English.

One of the most renowned skiing experts in Italy and a highly renowned mountain guide. David has been in the guiding trade for 25 years and is an extremely competent mountaineer and a fabulous skier. You may have come across his guidebook to Aosta Valley written together with Alessandro Mezzavilla. Speaks Italian, French and English.

An excellent climber and a devoted skier. He climbed some of the hardest routes with a legendary “Divine Providence” in the Mont Blanc massif as just one example. Voytek is an outstanding guide, with excellent interpersonal skills and thorough knowledge of the Lyngen area. Speaks English and Italian.